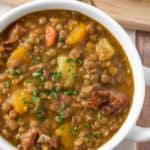 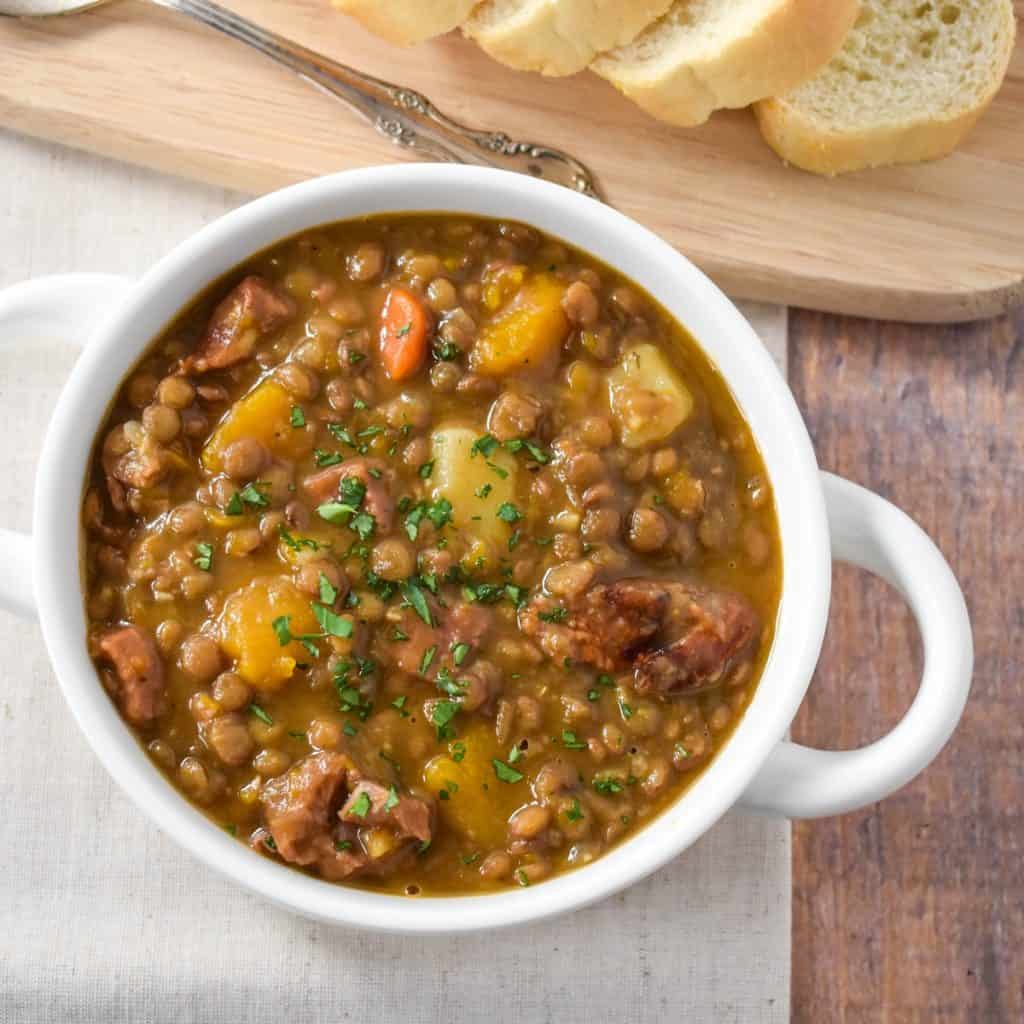 In Cuban cuisine potajes typically include vegetables, beans, and a cheap cut of meat. Lentils are a common ingredient in potaje. They are one of my favorite beans because they are versatile, wholesome, and they cook quickly. Try this bacon lentil soup and this chicken lentil soup for easy weeknight dinners.

What is a potaje?

Potaje (in English potage or pottage) is a thick soup or stew consisting of beans, grains, vegetables, or a combination thereof. It also may contain beef, chicken, fish, or other protein. Bean potajes are popular in Cuban and Spanish cuisine as a nourishing and affordable lunch or dinner.

What can I add to lentils for flavor?

What to serve with lentils?

Serve the lentils with white rice, fried green plantains, a piece of crusty bread, or crackers for dipping.

Place the ham shanks in the pot.

Pour in the chicken broth and water; add the bay leaf. Simmer the soup for 10 minutes.

Add the lentils to the pot, cover and cook for about 20 minutes until the lentils start to soften, stirring occasionally.

Remove the ham from the pot and add the potatoes and the pumpkin to the lentil stew.

Bring the liquid back to a boil, then lower the heat to medium-low, cover and cook for 15-20 minutes, or until the lentils, potatoes, and pumpkin are tender.

When the ham shanks cool down take the meat off and discard the fat and bones. Chop the ham and return it to the pot.

Remove the bay leaf and discard. Taste the lentils and add salt if needed. As a reference we added 1 teaspoon to ours.

Keep the broth at a simmer. If it is boiling too vigorously too much broth will cook out. Raise or lower the heat as needed. Stir occasionally.

Serve the potaje de lentejas with crusty bread like we do or with a side of white rice, green plantains, or crackers for dipping. Store leftovers in an airtight container, in the refrigerator for 3-4 days or freeze 2-3 months.

Reheat the soup in a saucepan or the microwave until heated through and steamy (to a temperature of at least 165°F). Add 1-2 tablespoons of chicken broth while reheating if the soup is too thick. Stir well and add more if needed.

Check out the Web Story for this Cuban style lentil soup for a quick visual on making this delicious recipe. 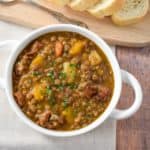