A Cuban sandwich, also called simply “Cubano” or Sandwich Cubano, is made with ham, roast pork, pickles and swiss cheese all generously stacked on Cuban bread. 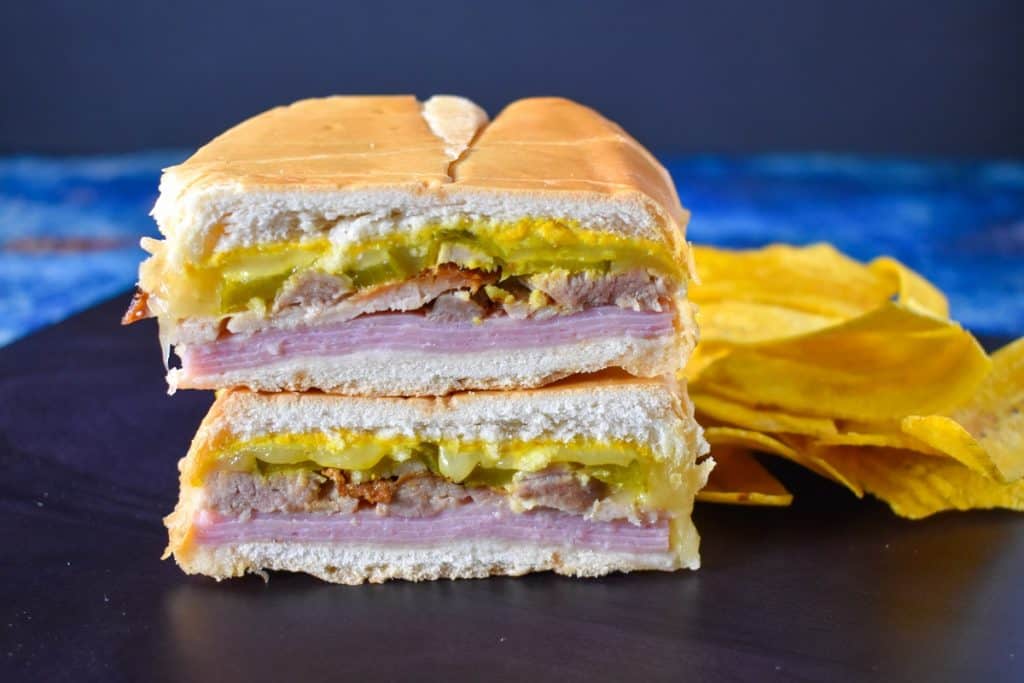 The sandwich is then lightly buttered and heated on a plancha (sandwich press) until the bread is toasty and the cheese is melted. It’s one of the best sandwiches ever and they can be found in cafeterias and restaurants all over Miami.

If you can’t get to Miami anytime soon, there’s no reason you should go without. Most of what you need to make a Cuban sandwich is really easy to get.

If you want to make a homemade Cuban sandwich, the sweet ham and swiss cheese are simple; you can pick those up at the deli. The roast pork on the other hand, will take some work…but oh is it worth it! Here’s a fantastic Cuban roast pork recipe. Make it for dinner one night and make Cubanos the next day. You can also make Medianoche (midnight sandwiches), or the very simple and incredibly delicious Pan con Lechon.

If you don’t have time to roast a pork shoulder you can take a short cut and make a couple pork tenderloins. Put together the mojo marinade. Marinate the pork tenderloins for a few hours to overnight. Remove them from the bag and discard the marinade. Grill the tenderloins until the internal temperature reaches at least 165°F at the thickest part. Grill time will vary, but as a guide it takes us approximately 50 minutes on moderate-low heat on a gas grill. Allow the pork tenderloin to cool and slice or shred.

A Cubano is made with Cuban bread, but it can be difficult to find. Unless you’re in South Florida you might have to use a substitute. Use bread that’s wide, crusty on the outside and soft and fleshy on the inside. Italian bread makes a pretty good substitute, so does a wide French bread (not a baguette). We’re going to press the sandwich which will help with creating a crusty exterior.

The remaining ingredients in a Cubano are:

That’s it for the sandwich. You can use a pastry brush to butter the top before pressing it, we do.

Once the sandwich is built it gets buttered up pressed until lightly golden and toasty. If you don’t have a sandwich press don’t let that keep you from enjoying the best Cuban sandwich. You can use a large skillet to press the sandwich. Here’s how:

If you want to try other popular Cuban sandwiches try this pan con bistec or this easy and delicious Cuban chicken sandwich.

This recipe makes one sandwich. To make more just double, triple, quadruple…you get the picture. Enjoy! 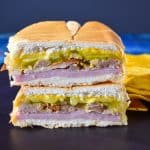 If you don’t have a sandwich press you can use a large skillet to toast the sandwich. Heat a large, heavy skillet on medium to medium-low heat. Place the Cubano on the skillet and place another heavy skillet, large lid or cast iron bacon press on top and press down gently. When the bread is toasted, flip the sandwich and repeat until the other side is toasted and the cheese is melted.