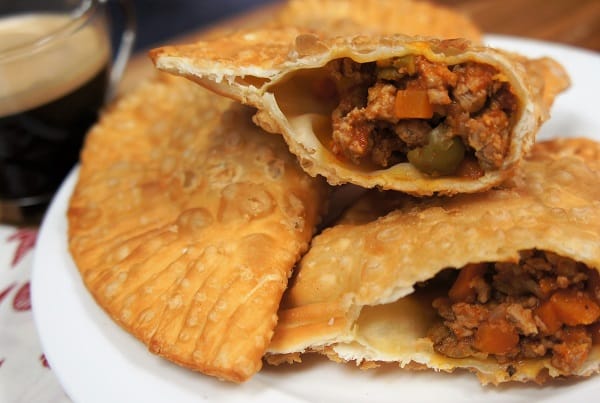 Empanadas are stuffed pastries that are baked or fried. They’re usually stuffed with savory minced meat like chicken, beef or chorizo. In this recipe I replace ground beef with ground turkey and make a (mostly) traditional Cuban picadillo. Then the empanadas are fried until golden. The result is a delicious flaky crust and savory meat filling. Delicioso!

¼ tsp. Black Pepper, or to taste

Canola Oil for frying, or use your favorite vegetable oil

Raise the heat to high, add the ground turkey, salt, pepper, cumin and oregano to the skillet. Stir  to combine the ingredients well, breaking up any large pieces with a wooden spoon or a spatula as you go. Cook 5 minutes to brown the turkey, stirring frequently.

Add the wine to the skillet; cook about 2 minutes until most of the liquid evaporates, stirring frequently.

Add the tomato sauce, 2 tbsp. water and olives, stir to combine. Lower the heat to medium-low, cover and cook for approximately 20 minutes to allow the flavors to develop and combine, stirring occasionally. Note: Keep the picadillo at a simmer, if the sauce is boiling too vigorously, lower the heat just a bit.

Take the picadillo off the heat and allow it to cool completely.

While the picadillo cools, prepare a station to build the empanadas

Add enough oil to a large, deep skillet to cover the bottom by an inch or two. Heat the oil over medium-high heat. Add one or two empanadas at a time. Don’t overcrowd the pan and make sure they don’t touch. Fry the empanadas in the medium-hot oil until golden brown, turning a few times to get a nice even color on both sides.

When you lift the empanada from the oil, allow it to drain a few seconds over the skillet, and then place it on a pan that’s been lined with a couple paper towels.​

Depending on where you live you may be able to find empanada discs in the freezer section of larger food chains or Latin markets. They’re round, thin dough discs that come frozen, usually ten to a pack. Defrost the discs according to package directions prior to using.

These beef empanadas are baked not fried and feature an easy-to-make ground beef filing. In this recipe we use premade empanada disks so they come together really quick. And with step by step instructions, you’ll be an expert in no-time. Empanadas make great appetizers, and they’re perfect for breakfast, brunch or as a mid-day snack.