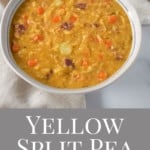 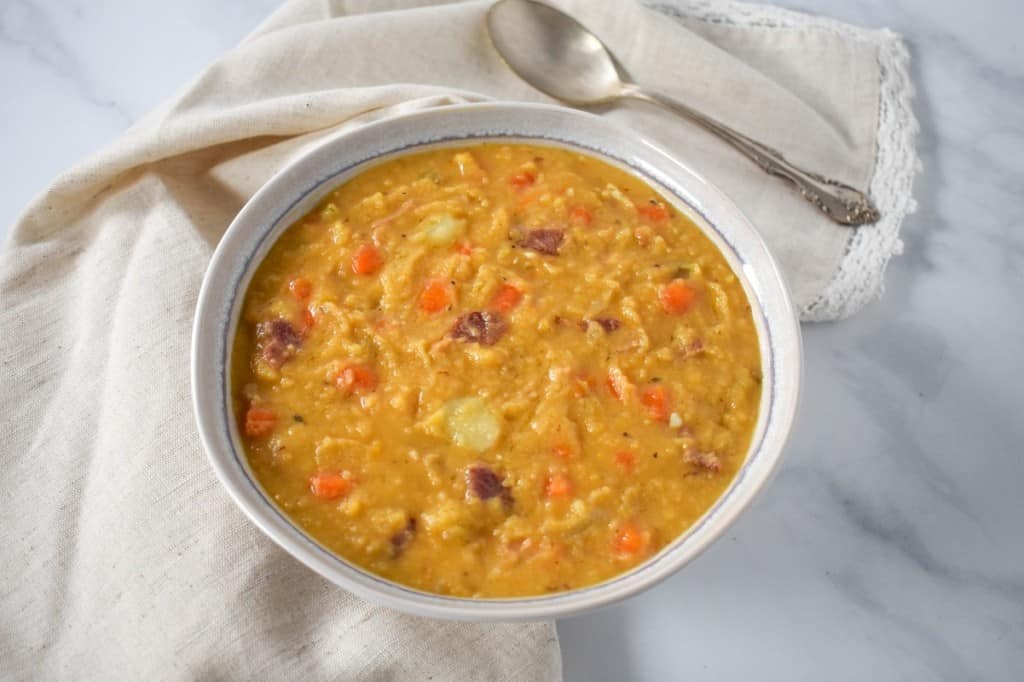 Split pea soup doesn’t take very long to make. Split peas are like lentils, they cook quickly (by bean standards anyway). In our Cuban split pea soup recipe we use ham shanks and simmer them in the soup. But for this yellow split pea soup we use bacon instead of ham shanks, cutting the cooking time a little.

What is the difference between yellow and green split peas?

Split peas come in two dry varieties, yellow and green. There is no major difference between yellow split peas and green split peas. They require the same cooking time and have similar taste. Some say yellow is sweeter, some say green is sweeter. I find the flavor of the yellow split peas to be milder and sweeter.

Sort and soak the split peas

Before starting the prep work, pour the split peas on a clean, flat surface (or in a very large bowl) and sort through them. Look for foreign objects like twigs and small rocks, discolored or misshapen beans.

Don’t skip this step. Despite great processing practices, small stones and other foreign objects still make it into the packaged product.

Rinse the split peas well. Then, place them in a bowl, cover with water and let them soak while you get the rest of the ingredients ready.

The best way to rinse split peas is to pour them in a large, mesh strainer and run them under cold water until the water runs clear. I’ve used my pasta colander in the past and those tiny peas get stuck in the holes. Use a mesh strainer and spare yourself the aggravation!

Things will move quickly at the start of this soup. It’s best to have everything ready to go before you start cooking.

Remove the bay leaf from the pot and discard. Taste the soup and add salt, if needed.

Serve the soup with warm, crusty bread, crackers, white rice or on its own.

Store the split pea and bacon soup in an airtight container in the refrigerator for 3-4 days.

To freeze the soup, allow it to cool so it’s not piping hot. Place it in airtight containers; remember to leave room for expansion when the soup freezes. Place the soup in the refrigerator to let it cool further, and then move it to the freezer. Freeze the soup for about 3 months.

Reheat the soup in a saucepan over medium to medium-low heat. Add 2-3 tablespoons of chicken broth or water and stir. Once the soup stars warming and you can gauge how thick it will be, add more liquid until it reaches the desired consistency and is hot. 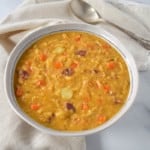