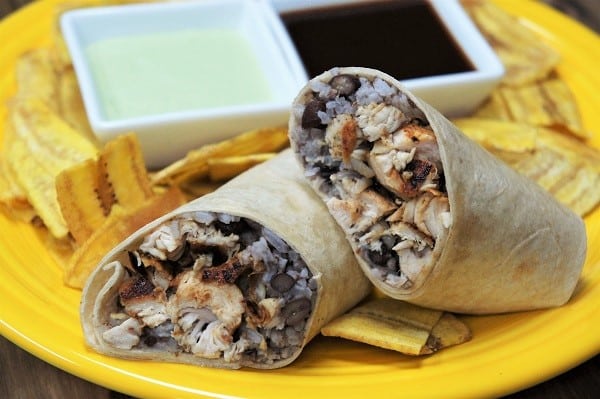 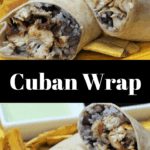 This Cuban Wrap is a fun take on some of our favorite Cuban classics. In this recipe, white rice, black beans and perfectly seasoned chicken are combined in a simple wrap. It’s super-easy to make, perfect for weeknight dinners. We serve the wraps with two delicious sauces: a simple Cilantro Ranch sauce and a Guava BBQ sauce. Enjoy!

Season the chicken first and refrigerate while you prepare the rice and black beans. Once everything is almost done start the chicken, it cooks up pretty quick.

Add the salt, garlic powder, cumin, oregano and pepper to a small bowl, stir to mix well. Season the chicken on both sides with the seasoning mix. Cut the lime in half. Squeeze half the lime juice over the chicken, turn and squeeze the other half. Refrigerate for a 30 minutes or so. Remove the chicken from the refrigerator, let it sit out for a few minutes to get the chill out a bit.

In a medium saucepan, bring the water to a boil over high heat. When the water is boiling vigorously, add the rice and 1 tsp. of salt, stir. Lower the heat to medium and boil, uncovered, until most of the water has cooked out and you can see the rice on the surface, approximately 5-7 minutes. Stir the rice, lower the heat to low and cover. Cook the rice on low for about 25 minutes until done. Uncover the rice, fluff with a fork. Cover and keep on low heat (or warm setting) until ready to make the wraps.

Add the black beans to a small saucepan. Add in the olive oil, red wine vinegar, garlic powder, oregano and cumin. Stir the beans well, cover and set the saucepan over medium-low heat. Let the beans slowly warm and come to a simmer, stirring occasionally so the bottom doesn’t burn. Simmer the beans for at least 10 minutes; make sure you stir to prevent sticking. Lower the heat to low until ready to serve.

Heat the canola oil in a large skillet over medium-high heat. When the oil is hot, but not smoking, add the chicken. Cook the chicken about 4-5 minutes per side, depending on the thickness. Cook until the chicken is nice and golden and cooked through. Ensure the internal temperature of the chicken is at least 165°F at its thickest piece.

When the chicken is cool enough to handle, chop into cubes

Divide the chicken into 4-5 portions

Add about ½ cup rice to a bowl. Add 2-3 tbsp. of the black beans, don’t make it too saucy. Gently stir gently to combine.

Add the rice and beans to a wrap, a little off-center towards you. Arrange it so it’s not mounded in the middle and leave room on the sides. Add one portion of the chopped chicken.

Fold in the sides of the warp. Then roll the wrap away from you, tucking in the ingredients with your fingers. Keep it seam-side down and cut it in half. Plate the Cuban wrap seam-side down. Repeat with the remaining ingredients.

If desired, serve the Cuban wrap with a super easy-to-make Cilantro Ranch Sauce and Guava BBQ Sauce. The recipes are below. Enjoy!

Add the ranch dressing and the cilantro to a small mixer (like a Nutribullet). Blend until all of the ingredients are incorporated. Set aside until ready to serve.

Add the BBQ sauce to a bowl, add the guava preserves and stir vigorously with a fork until combined. Set aside until ready to serve.